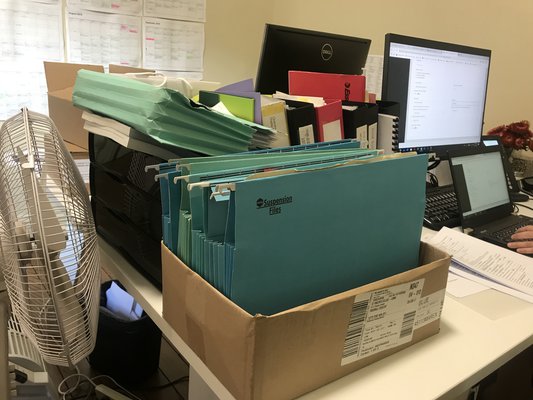 It’s been another exciting month at EnrolHQ. Happy "Last Day of Term" for those of you in NSW who actually get time off during term breaks. I hope your desk doesn’t currently look like the one above with a pile of paper applications sitting on top - it’s a real photo from a real school!

For June, I actually spent a lot of it driving all over Sydney to visit different schools and talk to different Enrolment Registrars and Marketing Managers. I’ve been demo-ing new features, training up people and gathering feedback from all of you to make EnrolHQ a better system.

As a Product Manager, a major part of my job is to *listen* and figure out what to roll out to help you do better in your job.

Here’s what we rolled out this month (I’m going to explain these new features in more detail in coming posts):

That’s all for now, wishing all those of you who have a break coming up a happy and safe holiday, for the rest of you, I’ll see you at the coalface on Monday!

New Features Released in May ‘20

We use EnrolHQ (and have done so from Nov 2018)
and would recommend you check them out as they
provide electronic signatures on Application and Acceptance of Place.
Our enrolment process has been totally streamlined.

At St Vincent’s College we use the EnrolHQ platform
which provides innovative solutions in this space. We have found their team to be very responsive to our needs.

We are currently (2019) in the process of deploying EnrolHQ (linking\pushing directly into Edumate).
The process has been great, the team at EnrolHQ are very accommodating.

At Mount St Benedict College we have implemented EnrolHQ.
It works brilliantly and we can successfully pull data automatically into our SQL databases as needed.
Reporting for Leadership is good and our Marketing team are very happy with it.
What I like with EnrolHQ which I didn’t find in other products was the tracking element of the enrolments from initial enquiry all the way through to Alumni.

If you have a question, we'll be happy to answer it.

Write us a short note below and we'll get in touch.